This proposal first appeared on Microsoft Edge explainers. Open UI has taken up <popup> and related APIs as work items for incubation. Further development of these ideas will be driven in a draft specification within Open UI. The following represents the state of the original proposal as of March 18, 2021.

Note: This is an outdated proposal!

When building a web application, there are many cases in which an author needs to create transient user interface (UI) elements that are displayed on top of all other web app UI. These include user-interactive elements like action menus, form element suggestions, content pickers, and teaching UI. These paradigms will be collectively referred to as popups.

Examples of popups may include action menus, teaching UI, or the listbox portion of a <select> control

For many such use cases, it is incumbent upon the author to handle the popup’s styling, positioning and z-index stacking, focus management, keyboard interactions, and accessibility semantics. Because no platform-native solutions exist to comfortably handle all these use cases, individual authors and framework developers must continuously re-write the same classes of controls. This results in duplicative work for the web development community, and inconsistent experiences for users of these web applications.

The web platform can be extended such that authors can get popup interactions and styling “for free”, but have enough flexibility to support their individual use cases.

Authors can efficiently create popups which:

There are many different types of elements that are meant to be displayed in the top layer of a web application, but not all may be popups. We propose that all popups share “light dismiss” behaviors. Other elements which are aesthetically similar to popups, but do not light dismiss, may be better addressed with the <dialog> element or other new purpose-built elements. Such examples include: alerts, toasts, custom tooltips, and miscellaneous, persistent popover UI.

We propose a new HTML element called popup. This new element can be used for any transient UI that “pops up” over all other web app UI. A popup may be its own standalone element (such as a teaching bubble) or it may be part of a larger composited component (such as a combobox).

Option A: the popup attribute

One use case for a popup is a popup menu triggered by a menu button:

An author could produce this popup menu using the following markup:

The popup attribute on the button element (referred to later in this document as the “invoking element”) takes an IDREF pointing to the relevant popup. Invoking this button will likewise invoke the popup with the matching ID.

This popup attribute will apply accessibility semantics equivalent to aria-haspopup="true" and aria-controls="menuPopup" on the button (as well as a “controlled by” reverse relationship mapping on the popup itself). This attribute is valid only on a subset of interactive elements:

Option B: the open attribute 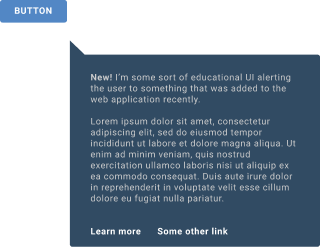 Some popups, such as teaching UI, might be shown to the user upon initial “page load”. For popups which aren’t shown as the result of a user interaction or JavaScript-controlled logic, apply the open attribute to show the popup:

Suppose that an author instead wants to show their teaching UI upon some app-internal logic. Such an author could instead call show() on the popup from script:

What happens when a popup is shown

Until the author has used the popup attribute, open attribute, or show() method, the popup does not display (has a computed value of none for its display property). Showing a popup places the popup into a browser-managed stack of top-layer elements that allow the popup to produce a box in accordance with author-supplied styles. Initial styles from the user agent stylesheet consist of:

Only one “top-level” popup may be displayed at a time. When a popup is shown and placed on the stack, it will remove all popups from the stack until it encounters an “ancestral” popup, or the list is empty. In this way, the user agent will ensure that only one popup and its child popups are ever displayed at a time—even across uncoordinated code.

The following would be considered an “ancestral” popup:

popups in the stack are laid out and rendered from the bottom of the stack to the top. Each popup will paint atomically as its own stacking context.

Showing a popup via options A (popup attribute) or C (calling the show()) method will also cause the open attribute to be set on the popup.

By default, focus remains on the current active element when the popup is invoked. If this element is somehow destroyed, focus moves to a focusable ancestral element.

popup is inherently focusable, but is not reachable by sequential keyboard navigation by default (equivalent to tabindex=-1). Authors can explicitly move focus to the popup by calling focus(), or implicitly to the popup or one of its descendants using the autofocus attribute.

To move focus to the popup itself when show is called—without the need to explicitly call popupElement.focus()—place the attribute directly on the popup:

To move focus to a descendent upon invocation, place the attribute on that descendent:

These autofocus rules will be processed each time show is called, as opposed to initial document load.

Some authors may need to automatically focus the popup’s first focusable descendent, and may not wish to write script to determine at runtime which element that is. In such cases the delegatesfocus attribute can be applied to the popup:

In the markup above, the button element will receive focus any time the popup would normally receive focus. For, example when popupElement.focus() is called.

By default, popup has a fixed position in the top-left corner of the viewport. With many popup use cases, however, authors need to be able to pin the position of one element to another element in the document; this is the case with our popup menu. Absolute positioning schemes sometimes suffice for this purpose, but require specific DOM structures and provide no functionality for repositioning.

We will soon make an additional proposal for a CSS anchored positioning scheme, which can be applied to popup and other top-layer, interactive elements. For now, it is worth noting that a popup’s anchor element (the element it will be “pinned” to) can be expressed using a new anchor attribute on the popup:

Note: for many popups, the element which invokes the popup and the element the popup is anchored to will be one and the same. However, there are cases where the author may want to anchor to a child/parent of the element which invoked the popup. Similiarly, there are cases (such as this teaching UI example) where no such invoking element exists. Therefore, we do not propose collapsing invocation and anchoring responsibilities to one attribute, as they are distinct responsibilities. In cases where the anchor attribute is unset, but there is an associated invoking element, we could explore treating this as the anchor element. There would be complexities to think through if more than one element is associated to a popup via the popup attribute, or if the anchor association causes reordering of trees (refer to Open Questions).

Recall that authors can apply the open attribute in order to show the popup:

Removing the attribute will dismiss the popup.

All other following methods of dismissing the popup will automatically remove the open attribute from the popup.

…repeating/reversing that action will dismiss the popup. In this example, invoking the button again when the popup is visible will hide the popup. Moving focus from input type="text" (so long as focus does not then move to the popup) will hide an associated popup.

A popup can be hidden by calling the hide() method:

The popup may also be implicitly dismissed due to user interactions which trigger light dismissal. When dismissal occurs:

An opened popup will have “light dismiss” behavior, meaning that it will be automatically hidden when:

A generalized definition of “light dismiss” is being developed at Open UI.

Applicability to the select control

While some popups may be entire components in and of themselves, other popups may be a part of a larger whole. For example, the native select element includes a popup (sometimes rendered as a wheel) to present options to the user: 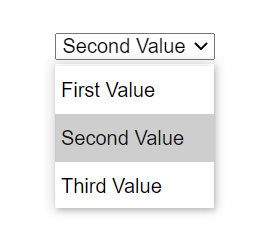 Per “Enabling Custom Control UI”, authors should be able to customize parts of a native control, including the select popup. While we anticipate discussing the anatomy of a select in depth in the Open UI venue, any solution for providing arbitrary popups will also be applied to the select’s Shadow DOM.

For example, popup may be used in the select Shadow DOM like so:

If it fits their use case, an author could then entirely replace this listbox with their own popup in markup:

Freedom over the size and position of a popup could enable an author to spoof UI belonging to the browser or documents other than the popup’s document. For this reason the popup will be constrained as all other elements of the relevant document are, by clipping the element to the document's layout viewport.

This behavior as previously proposed adds complexity to the platform, and it is not clear whether there is enough value to authors for the platform to take on that complexity. We welcome feedback on this point and preserve the previous proposal here.

In the markup below, a table with many rows is rendered, each of which displays a custom popup filled with commands when right-clicked. The popup is defined once and its anchor attribute is adjusted so that it is shown aligned with the table row when the contextmenu event is received.

After a command is selected from the menu, the menu dispatches a custom command event which is then handled by the table row. The table row receives the event even though it isn’t a DOM ancester of the popup. This is because the event target parent of a popup is its anchor element.